FLAME is an interactive fire sculpture, a symbolic analogy to the power constituted by invisible structures of the cities.

By giving this fire back to the citizens, FLAME aims to remind them the power they have within to forge the tools of the new century.

Fire has been a strong symbol for the humanity, its associations going back to the early times of civilization. For the first hunters and gatherers, and even more for the settled societies, fire had defined the central gathering and sharing point. The point where food was prepared with its heat, and wounds cleaned with its ash. The space where good times were celebrated, and bad times mourned.

As the civilizations got more complex and as villages evolved more and more into cities, fire started to become the power that forged the tools and weapons of this complexity, and hence initiated the progress of technology. Its symbolic representation rose to its highest form with the industrial revolution, where steam engines converted this power directly into usable energy, which eventually became the main driving forces of the cities.

What also happened meanwhile, however, was the withdrawal of this power from the public, only to be controlled by the few. Once the fire started to disappear from the cities, along with its customs and traditions, the people also lost their say on the rules that governed them and their cities. Both the fire and the mechanisms of the city became invisible, falling out of reach and understanding of its citizens.

FLAME, therefore, wants to give the fire back to the people. It desires to enable them to forge together the tools of the new century, and to burn to the ground the institutions that restrain them, if necessary. And remind them once more the forgotten fact that, the very basis of this fire, is in nothing but their own breaths.

FLAME is an interactive fire sculpture in synchronization with the Ars Electronica Facade. It is a symbolic analogy to the power of invisible structures in cities: in the form of a flame, this power is given back to the public, enabling them to forge the tools of the new century with their breaths.

Fire, even though it can reach great strengths, would die without the care of the people that initiates it. This simple analogy inspires our main interaction modality to involve audience participation: Blowing. Installing physical interfaces, that detect and respond to the breathing of the audience, will start powering up the symbolic fire on the Ars Electronica Facade. This will also reflect as “the citizens giving their breath to keep the fire alive”

This interaction and participation is specifically important for this context: as cities turned into more complex structures, the participation of the individual diminished in a direct way. Even though the individual citizen knows that his involvement in the city life is affecting the city, he is losing the means of being an active creator in this way. He doesn’t feel he owns the city. This, for us, is a critical problem in the context of Digital Citizen, as this space for participation in urban contexts are not high and diverse enough to satisfy the people in this way. This is why we strongly believe that direct human interaction and immediate feedback is necessary for reaching this state of social involvement.

We want our interface – facade relationship to carry the micro to macro effect on an instant feedback basis. This simply means, the interaction of the user, in a metaphorical way, is amplified and reflected on the facade. For our concept, this analogy is obtained through breathing oxygen into the fire, and immediate response of the Facade to this input by growing flames and marks of incandescence.

The feeling obtained by the audience in this manner is an important basis for our symbolic approach to the Translocal Connectivity of (In)Visible Cities: The daily life and decisions of a citizen, and the data generated through this process, are the small bricks of decision making systems and structures that eventually shape and construct the city. The choice of taking a specific route on a daily commute, might eventually affect the new metro line to be built on that path. This, due to the complexity of city structures, is something that has become invisible to us. Our interaction analogy, is therefore, trying to remind this feeling back to the people, by displaying them that their involvement and actions do have an impact on what keeps the fire going or not, surpassing the boundaries of spaces and time.

We are missing the spiritual, pagan, ritual and magical feelings that have come to diminish especially in the digital age. Recreating these for our age, making analogies to thousands-years-long symbols using digital technologies, and creating magic in this process is what motivates us.

Our expectation, therefore, is to open up this dimension to both people of our fields, and also to the public. 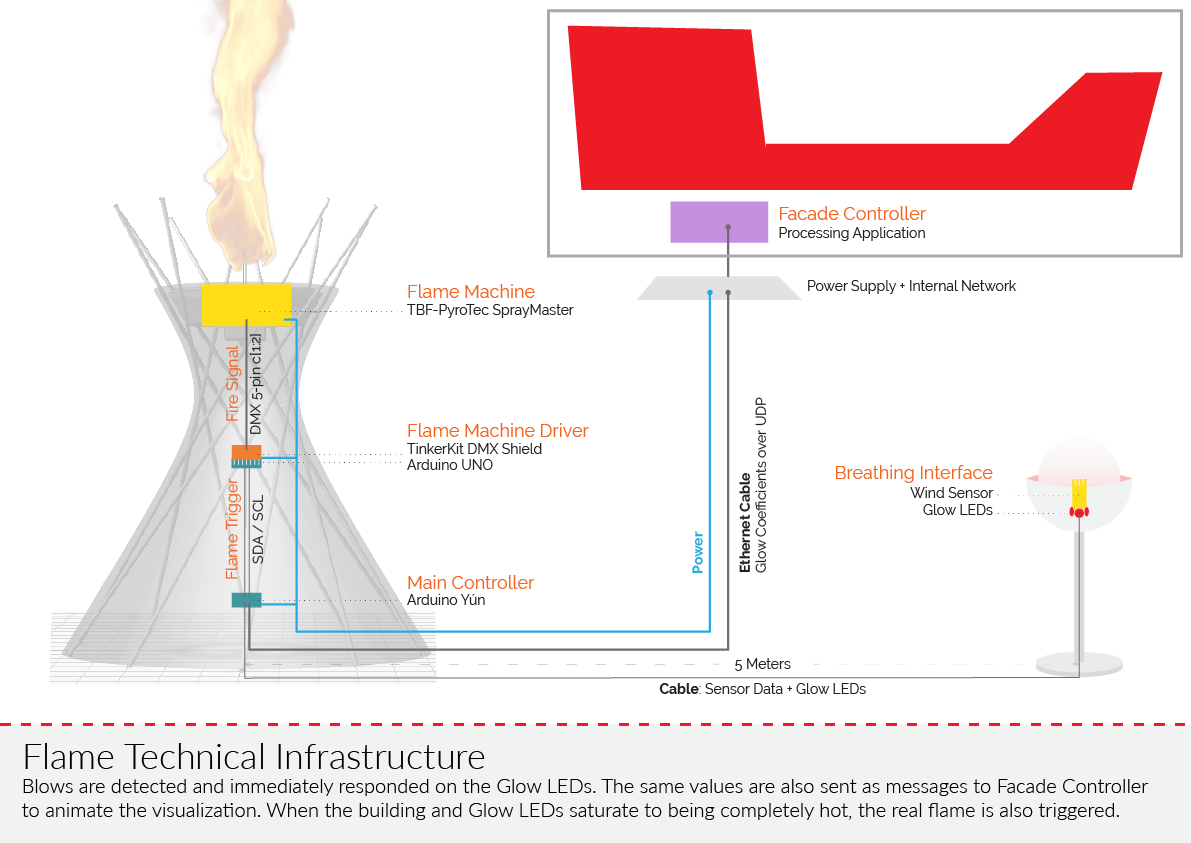 The construction will consist of the main fire sculpture and peripheral point of interaction. The main fire scupture includes the flame thrower, the computational boards (sensor reading, facade visualization control, flame thrower control), and metal structure carrying these. The breathing interface consists of a standing pipe carrying two steel half sphere, carrying inside a wind sensor and an LED ring.

Based on the individual responses from the blowing inputs, the Facade Visualisation Application will generate flame and incandescence graphics on the facade, corresponding to the direction of the input. These visualisations will be then communicated with the main FacadeControl Application running on the Ars Electronica servers.

When saturation points are reached, Arduino Yun sends a fire trigger message to Fire driver hardware. This message will be translated to fire triggering DMX message over the defined duration.

Special thanks to Bernhard Ranner for metal work and fire sculpture.

FLAME is commissioned by Ars Electronica and Connecting Cities Network under EU FP7.

Being Creative with Arduino
We use cookies to ensure that we give you the best experience on our website. If you continue to use this site we will assume that you are happy with it.Ok
Scroll to top